Commenting the appointment, Stella Kesaeva said:
“It was decided in April 2012 that the artist Vadim Zakharov would represent Russia at the Venice Biennale in 2013. The idea of inviting Udo Kittelmann as curator followed from the choice of the artist. As a result, the Russian Pavilion will be curated by a citizen of another country for the first time in its history. Udo Kittelmann is one of the most renowned curators in the art world and his appointment is an important and conscious step, reflecting our principal objective, which is to bring Russian art out of isolation and secure for it the attention that it deserves at the highest international level. I am very happy that Udo Kittelmann shares our view and has accepted the project.”

Accepting the appointment as Curator of the Russian Pavilion, Udo Kittelmann said:
“I am very pleased to take on this responsibility and the tough challenge of curating the Russian Pavilion at the forthcoming Venice Biennale.
The fact that Russia will be represented by the artist Vadim Zakharov means much to me. I am greatly honoured that Vadim Zakharov proposed me as candidate for the curatorship and that the commissioner, Stella Kesaeva, supported the idea, enabling the continuation of my long cooperation with Vadim, which dates from the 1990s. I greatly admire the contribution, which Vadim Zakharov has made to contemporary art. His work has a continuity of development and is marked by a unique outlook and independence of artistic thought. His constant role as thinker and protagonist of the Moscow Conceptualist movement from the end of the 1970s remains a hallmark of his work right up to the present.
As a curator, it gives me joy to be able to present this outstanding artist to a broad public. It would be hard to find a better place for an international exhibition of Vadim’s work than the Russian Pavilion at the Venice Biennale.”

The Venice Biennale in 2013 will be held from June 1 until November 24, with preview days on May 29, 30 and 31. Massimiliano Gioni has been appointed artistic director of the Biennale. The Russian Pavilion was built following a design by the architect Alexei Schusev. It is one of the oldest Biennale pavilions and stands on the main thoroughfare of the Giardini della Biennale.

Udo Kittelmann
Udo Kittelmann was born in 1958 in Düsseldorf, Germany.
Since fall 2008, he has been the Director of the Nationalgalerie, Staatliche Museen zu Berlin (State Museums in Berlin). In this position he is responsible for the Alte Nationalgalerie (Old National Gallery), Neue Nationalgalerie (New National Gallery) and the Hamburger Bahnhof, Museum für Gegenwart - Berlin (Museum for Contemporary Art), as well as the Berggruen Museum, the Sammlung Scharf - Gerstenberg (Scharf-Gerstenberg Collection) and the Friedrichswerdersche Kirche.
Udo Kittelmann worked as a freelance curator from 1987 to 1993, organizing more then 100 exhibitions of contemporary art during that time. From 1994 to 2001 he was the director of the Kölnischer Kunstverein (Cologne). In 2001, he was the commissioner of the German Pavilion at the Venice Biennale, where the Totes Haus u r project by Gregor Schneider won the Golden Lion award for best national pavilion. Between 2002 and 2008, Udo Kittelmann was the director of the MMK, Museum für Moderne Kunst (Modern Art Museum) in Frankfurt.
Udo Kittelmann is the author and editor of various publications and essays on art.

Vadim Zakharov
Vadim Zakharov was born in 1959 in Dushanbe. After graduating from the Moscow Pedagogical Institute in 1982, he pursued experiments in conceptual art independently and in collaboration with other artists, including Sergey Anufriev, Igor Lutz, Victor Skersis, and Ivan Sokolov. Since 2008 he has been a participant of the Capiton and Corbusier groups together with Yuri Leiderman and Andrei Monastyrski. He took part in the activities of Apt-Art and the Club of Avant-gardists. In 1992 he organized Pastor Zond Editions, a publishing house with a catalogue of over sixty works, including the Pastor almanac. Some highlights of his exhibition history include the 49th Venice Biennale in 2001, Berlin-Moscow/Moscow-Berlin 1950-2000 (2003-2004), and Russia! at the Guggenheim Museum in New York in 2005. In 2003 his Monument to Theodor Adorno was erected in Frankfurt-am-Main. He is the author of Monument to Utopia created for the exhibition, Pavel Filonov. Witness of the Invisible (St. Petersburg, 2006). In 2006 he won Russia’s Innovation Prize for Contemporary Art, and in 2009 he was the winner of the Kandinsky Prize. He currently lives in Berlin and Moscow.

Stella Kesaeva
Stella Kesaeva is the President of Stella Art Foundation, which was set up as a non-profit organization in 2003. The mission of the Foundation is cultural exchange, support for Russian art and for young artists and the creation of a museum of contemporary art in Moscow.
Stella Kesaeva was appointed as commissioner of the Russian Pavilion at the Venice Biennale in 2011, 2013 and 2015 by decree of the Russian Ministry of Culture. 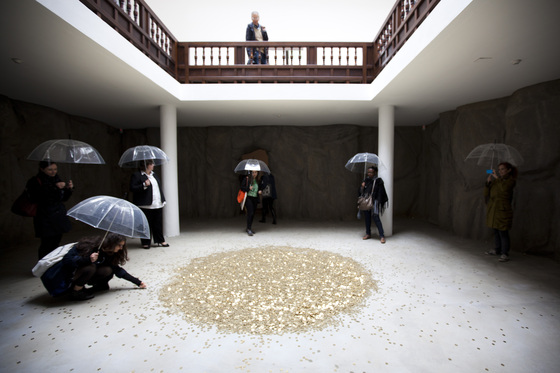